I haven't blogged in a while but I thought I'd pop in and give ya'll this little link. Enjoy:

I love this blog, not because of the specifics but because I think moms are far too judgmental of each other. We see other moms doing things we "disapprove" of, like using an iPhone at the park when we really have no idea what they're doing or what their daily life is like. That's why I liked this post in response to another blog post I read recently.

I've been busy around here with kids, family, life and a new cupcake business! Check me out on Facebook at:

We celebrated Abigail's 5th birthday on Saturday. Sadly, she came down with a bad cold and throat infection so the plans for the day were modified a bit. We stayed home but still had a small celebration. Happy birthday, darling girl!! We love you!!
Posted by Unknown at 1:19 PM No comments:

I've been thinking about my good ole' blog (maybe it will have to end soon, who knows). I just haven't had a chance to post! We've been plagued with . . . the plague. Well, not really. It started on January 2 with Elsie having croup, then an eye infection, which lead to Andrew getting the same cough, and an eye infection and being out almost a whole week of work. I had a bad sore throat that week but never got the eye stuff or the coughing.

We managed to survive that week and then during the weekend, Noah started throwing up. It only lasted 8 hours or so but he was pretty sick. He was fine the next day and then on Monday, I started feeling bad. I had to call Andrew at work and ask him to come home because I had also been hit with the same stomach bug. Something about cleaning up a 20 month old's vomit for 8 hours might make you susceptible to catching it!

While I was laying in my bed in misery, I heard Elsie downstairs getting sick as well. Thankfully Andrew was still well and able to take care of her. He came upstairs in the middle of the night after Elsie was on the mend and went to bed. I was so terribly achy and couldn't sleep so I moved to the couch for some TV distraction. Andrew ended up getting it that night as well.

We were a sorry pair the next day, I'll tell you. For breakfast I managed to slap down some bowls in the living room and pour crackers, cereal, and toast pieces in them for the kids to graze on. Elsie and Noah didn't care so much because they'd been sick and were recovering but Abigail hadn't been sick and wanted real food. I managed (somehow) to make her cheese quesadillas for lunch but that's about all I could do!

I had only slept an hour or two the night before. So, we made it through that day and about the time we all went to bed, Abigail started complaining about her tummy. We gave her a "bucket" (a bowl actually) and let her keep it in bed. Her instructions were to stay there until she throws up and then she can come get us (because otherwise many nights would be filled with her crying wolf about her tummy, just wanted to get out of going to bed). Well, this night it actually did happen. She came and got me at midnight to say she'd thrown up. I made a bed for us on the couch and got her bowl "prepared" and I dozed while she watched some TV. She got sick several times before asking to go back to bed at 3. She slept until 5 when she woke me up again because she'd been sick and this time I asked Andrew to cover for me since I was oh, so tired. He took care of the kids until about 8:30 when he left for work. Abigail recovered easily the next day.

This may just seems like a tragic tale of your usual stomach bug (that hits everyone in the family!) but alas, Noah and Elsie have continued to struggle with stomach problems all week. They randomly vomit (usually in the living room, blah!!). Noah has finally ceased to throw up, I think. It's been a few days for him but Elsie still vomited twice today! I'm getting concerned about her so we'll continue to watch her. She is desiring to eat and is drinking and having wet diapers so I don't think she's in immediate danger.

It's been a long road since the first of the year. My soul is desperately seeking some normalcy. I know so many others have it so much worse than this, though. What we've been through is just temporary uncomfortableness and I'm thankful for that!

I'm just hoping next week will be better!!

(Especially since I have a carpet cleaner coming on Tuesday to give me a quote to clean my living room carpet. Ugh!)
Posted by Unknown at 6:23 PM No comments:

We're home from our trip to Kansas. We had a really good trip. It was so wonderful to spend Christmas with my family. It was easy, no one got sick, we didn't get stuck in weather, etc.

I'm a bit homesick now but am battling that by looking up flights and making plans for the next visit (flights are SO expensive right now, though).

Busy unpacking and enjoying Christmas gifts. Enjoy our own beds again! I managed to sleep from 9:15 pm until 8 am this morning, only getting up once with Noah. We've got to work on that (seeing that he's 19 months old!!).

We are leaving tomorrow for our Kansas trip. If you don't hear from me on here, Merry Christmas!
Posted by Unknown at 7:08 AM No comments:

Merry Christmas from the Schechters! 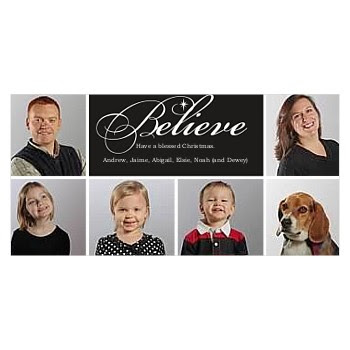 Christmas Card for Blog
Posted by Unknown at 7:34 PM No comments:

Is it really almost Christmas time? It doesn't feel like it to me, at all! Besides the reminder of the big tree in my living room and if I happen to leave my house, Christmas lights, I haven't hardly done anything to remind myself that it is the season of Christ's birth!

Mostly this last week is to blame. It's been a rough one with everyone being so sick. Noah and Andrew were especially bad. I finally got it as the weekend approached and felt terrible on Saturday (I thought my headache might kill me!) but I am feeling much better tonight. I think I'll feel almost normal tomorrow. I haven't been to a Christmas concert or even been shopping for that matter. That's right, this year I did all our shopping online. Much easier than having to go out after the kids were in bed or drag all three with me. Would NOT have been good!

I'll be looking for ways to put myself into a Christmas spirit this week. We're approaching our bi-annual (that's right isn't it? every other year?) trip to Kansas. Preparations are needed to ensure a smooth trip (or at least as much as possible - hasn't been the greatest in recent years).

Not much point to this blog, I guess. Just remembering what happened this year in preparation for Christmas. I did buy the kids a little Advent calendar with booklets for each day but that went out the window with the sickness from last week. Maybe we can catch up and be on track this week.

Merry Christmas if I don't write again before then!!
Posted by Unknown at 7:28 PM No comments: